Thousands of Arizona teachers and education advocates wore red on Wednesday in support of higher wages for public school instructors, but state political leaders say they already are on track to give them raises through the governor’s 2019 budget.

The raise would be 1 percent, or about $500 per year. But the growing movement of teachers demanding more could increase pressure at the Capitol to go further.

There may be room for negotiation: State revenues are nearly $275 million above what was expected so far this year, though Gov. Doug Ducey’s office says that extra money already is accounted for in his budget proposal.

Arizona teachers, who by some measures are the lowest paid in the country, are emboldened by the recent nine-day strike in West Virginia, which teachers used to successfully demand 5 percent raises.

Here’s what you need to knowabout the teacher salary debate at the Capitol.

What raises are on the table now?

Ducey’s budget, released in January, proposes an additional $34 million in 2019 to give teachers a 1 percent raise, following an identical bump in 2018.

“The governor has provided additional dollars that may be used for teacher pay in the budget on the table, and it’s based on long-term revenue projections,” Ducey spokesman Daniel Scarpinato said.

“The governor has a priority around driving up teacher salaries in a way that is sustainable and permanent, and this budget does that.”

Scarpinato said the 2 percent raises from 2018-19 need to be built into the ongoing budget so they are permanent and increase retirement benefits for teachers, and are not a one-time bonus. There was some debate last year regarding whether those increases would be permanent.

Ducey’s budget proposes another $100 million in discretionary spending for districts, which they could put into teacher salaries or other needs such as school maintenance.

House Speaker J.D. Mesnard, R-Chandler, and Senate President Steve Yarbrough, R-Chandler, both said that while they still need to negotiate the budget, they predict lawmakers will approve all of the education funding in Ducey’s proposal.

How much could teachers get from districts?

If the districts put all the $100 million in discretionary “additional assistance” money into salaries, it could translate into an additional 3 percent pay increase across the board.

“We’d hope salaries would be inflated,” said Mesnard. “It could be 5 percent total, and that’s where we’d hope to see it allocated. Because these are district decisions, they could choose to hire new teachers … My recommendation personally would be to give the teachers more money.”

But school advocates say that’s not normally how the “additional assistance” money is used. Because Ducey cut those funds in the past, many schools are behind on maintenance, which will compete with raises for that money, they said.

“Four years ago he cut money from that portion of the pie,” said Julie Erfle, a spokeswoman for AZ Schools Now, which represents a variety of education groups. “So this was part of a plan to get back to 100 percent funding.”

Mark Joraanstad, executive director of the Arizona School Administrators, said growing school districts that get more money each year based on their enrollment will have more discretion in using that money for raises. Schools with flat enrollment won’t have that discretion.

“They will have to make hard decisions between teacher raises and, for example, replacing two-decade old buses or leaking roofs,” he said.

He also said that following the recent school shooting in Florida, some schools are likely to use some money to increase security, limit school access points, and purchase new security cameras or alarms.

Are teachers happy with Ducey?

No. Education advocates say Ducey’s budget does not address all the financial needs of teachers and schools.

“Funding for our K-12 public schools is still well below where it was prior to the recession, and the governor has no plan for how we will restore that funding or do anything else that will help teacher salaries approach the national average,” Erfle said.

“We are calling on Gov. Ducey to immediately convene a working group with the leaders of both parties to create a bipartisan plan to solve our funding crisis.”

Another analysis, done by the Arizona School Boards Association and published in January, calculated the median teacher pay in 2018 for all teachers in Arizona at $46,949.

That calculation takes into account increased spending from Proposition 123 and shows that the median salary increased 4.6 percent since 2015, or about $2,000 per year more.

Even with that addition, Arizona is still far below other states.

How far behind are Arizona teacher salaries?

The elementary school teachers in Illinois rank No. 25 nationally in salary, with a median pay of $56,780 when adjusted forthe regional cost of living. To catch up, Arizona elementary teachers would need raises of $14,000, or about 34 percent.

For high school teachers, Alabama is the state with median salary, which was $57,454, according to the Morrison Institute data. To catch up, Arizona teachers would need a 20 percent raise of about $9,500.

Other education groups echoed their dissatisfaction with Ducey’s budget.

Does the state have extra money for teachers?

Maybe. Revenue collections are above the state forecast. But Ducey staffers said the governor anticipated the higher revenue when earmarking money for teachers in his budget.

The Joint Legislative Budget Committee, which provides financial analysis to state lawmakers, reported that following a strong December, revenue for the state’s general fund was $1.08 billion in January. That was $105.2 million more than forecast.

That puts the state $247 million ahead of projections for the fiscal year, with five months to go.

The JLBC likely will revise its annual revenue expectations, but it is not yet clear how much more money the state should expect to collect from taxpayers and commit to spending.

“As a starting point, however, we currently believe that a $109 million ongoing revenue adjustment may be reasonable,” the report said. “This estimate is not an official forecast revision, but reflects the reality that current revenues are outpacing the baseline forecast.”

The $109 million surplus that JLBC officials anticipate in the budget is enough to add 3.2 percent to teacher salaries, were it fully dedicated to that purpose.

But the governor’s budget was constructed with the presumption that revenue would be higher than the JLBC forecast. So while the $109 million is a surplus for JLBC’s budget assumptions, Ducey’s budget already has spent that money.

“These revenue projections did influence our budget formation,” Scarpinato said.

What if revenue continues to come in above projections?

Yarbrough, the Senate president, said that if revenue continues to exceed projections and the state has a windfall, additional money for teachers is possible, but not certain.

“Teacher pay is already the No. 1 priority for the budget that we are working on currently,” Yarbrough said. 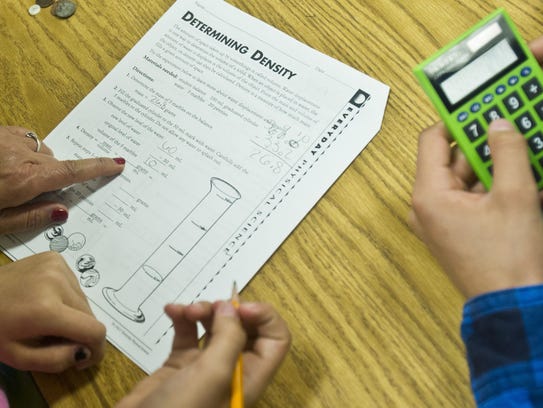 Gov. Doug Ducey’s proposed 2019 budget includes $400 million in “new investments” for Arizona public schools. (Photo: Patrick Breen/The Republic)
“Can we do even more for teacher pay than we already are contemplating? Maybe,” he said. “The challenge of course is there are a large number of competing interests, some education related, some of them not.”

He said in addition to infrastructure needs, he has a personal interest in paying down state debt.

“I happen to be a person, crying in wilderness, beating the drum, trying to do something about debt reduction,” he said.

What do education groups say about the surplus?

Erfle said teachers don’t take much optimism from the budget surplus predicted by JLBC because they don’t think lawmakers are prioritizing education.

“Though JLBC has indicated there is a surplus, we are not convinced that surplus will remain,” Erfle said. “There are half a dozen tax cut and credit bills currently making their way through the legislative process. If those cuts and credits are approved — as many have been in the past 20 legislative sessions —  we will likely not have a surplus in the next fiscal year or beyond.”

–Originally published by Ryan Randazzo with the Arizona Republic on March 9, 2018