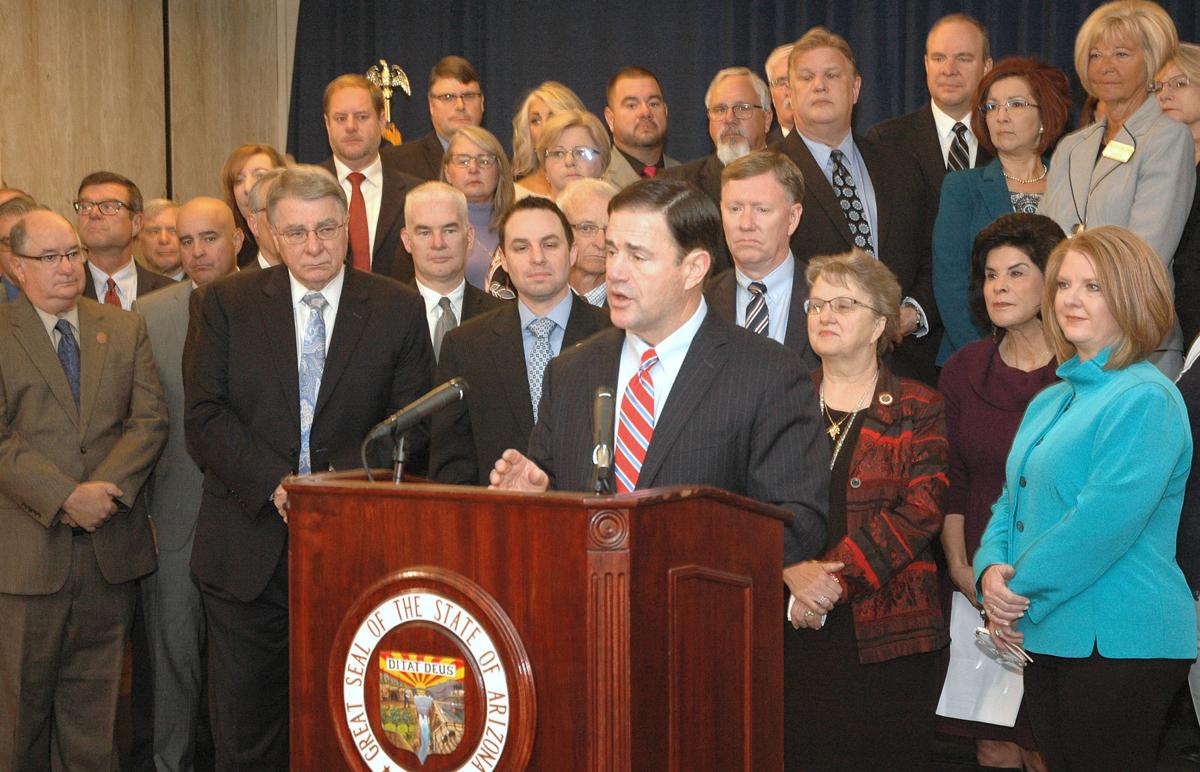 PHOENIX — Gov. Doug Ducey announced a plan Tuesday to eventually restore funding for capital needs for schools to what it was before the Great Recession.

The proposal would put an immediate $100 million this coming school year into an account that is earmarked for “soft capital,” things like computers, books and school buses.

Ducey hopes to boost that to $371 million by the fifth year of the plan. He also wants to give school districts flexibility, allowing local boards to use the dollars for other priorities, ranging from construction to teacher salaries.

The offer comes nearly a year after a coalition of schools and educators filed suit against the state charging it is not living up to its constitutional obligations to provide adequate funding for school buildings, equipment and repairs. It also comes just three days before Maricopa County Superior Court Judge Daniel Martin hears legal arguments in that case.

The governor said he believes the plan, if implemented by the Legislature, will go a long way to resolving the case without further court action.

But that remains to be seen.

Chris Kotterman, lobbyist for the Arizona School Boards Association, one of the plaintiffs in that litigation, said his group is in “active conversations” with the governor. He said, though, that Ducey’s offer won’t make the state’s legal problems go away.

“At this point, the case is moving forward,” Kotterman said.

Jill Barragan, executive director of business for the Avondale Elementary School District, one of the individual plaintiffs in the lawsuit, said there are things in Ducey’s plan worth considering.

Aside from the restoration of “soft capital” funding, she noted the governor’s plan also includes about $52 million for school repairs and proposes to borrow another $88 million to build five new schools, the locations of which were not specified.

“At some point, we have to determine are we going to go the litigation route, which who knows how long that could take, or are we going to try to address things legislatively and through the governor?” she said.

The lawsuit, however, is only one part of the K-12 funding issue.

Various educational and business interests are pushing for far more than what Ducey is offering. They cite figures that show current financing for schools is now $1.1 billion below where it would have been had lawmakers not slashed funding during the recession.

Dawn Penich-Thacker, spokeswoman for Save Our Schools Arizona, said the governor’s proposal amounts to 10 cents on the dollar, or only about $100 per student. And she chided Ducey for saying he is providing “new” money for schools.

“It is simply paying back a portion of what was taken out of the budget a decade ago,” Penich-Thacker said. “Paying someone back is not leadership.”

And Beth Simek, president of the Arizona PTA, said there may be less to Ducey’s proposal than advertised.

She noted the governor’s plan is built on there being enough money from existing tax revenues, something Simek said is far from a certainty. In fact, it was that reliance on general tax collections that resulted in the sharp cuts a decade ago during the recession.

“So without a dedicated revenue source, how is that going to help us to sort out the problem with underfunded and overcrowded classrooms?” she asked.

Ducey conceded he is relying solely on “available resources” and will not consider new taxes, rescinding previously approved corporate tax cuts eliminating tax credits. He also brushed aside figures prepared by legislative budget analysts which show that, on an inflation-adjusted basis, the state is putting fewer dollars per student into K-12 education now than it did a decade ago.

“This is a way to play with the numbers,” he said.

Ducey said while the money in his plan is to restore the “soft capital” formula, he said his proposal offers schools flexibility in how the dollars can be used. The governor said that could help eliminate calls to come up with additional funds specifically earmarked to increase teacher pay.

Douglas, who spoke at Tuesday’s event, said it would be “wonderful” if Ducey’s plan were enacted and the money is restored. She said, though, that does not eliminate the need to increase the current 0.6-cent education sales tax to a full penny.

“We still need to look at our teacher salaries,” she said, which various sources put at or near the bottom of all states.

In unveiling her plan last year, Douglas figured $300 million of that would go to teacher pay, a figure she said would translate into a 10 percent across-the-board pay hike for teachers who this year got a 1 percent raise with state dollars. The other $100 million would start restoring capital funding for schools.

She said the benefit to what Ducey proposed is that if it becomes law, the entire $400 million in additional funding could be earmarked for teacher pay.

Other proposals being floated by business interests are even more aggressive, including one proposing to take the levy to 1.6 percent, raising an extra $1 billion a year.

Still, Douglas said there would be some merit to what the governor wants, if it actually puts an end to the litigation.

“An added benefit that can come from this, to me, is to get money into our schools and out of the pockets and purses of lawyers,” Douglas said. Ducey agreed.

“I would much rather be paying teachers than paying lawyers,” he said.