Arizona’s public schools took a massive hit during the Great Recession. Our Legislature slashed $1.5 billion in funding, the biggest reduction in K-12 monies in the nation. The 2016 voter-approved settlement over inflationary funding, known as Proposition 123, only restored 18% of the cuts that had been implemented since 2008.

There has been little effort to restore funding beyond the dollars allocated in the inflationary settlement. Though lawmakers appropriated some additional dollars for fiscal year 2018, Arizona schools are still receiving less than a decade ago, resulting in overcrowded classrooms, an inability to fund new textbooks or technology, broken down school buses and leaky roofs, and a loss of critical support staff such as nurses and guidance counselors.

Thousands of Arizona classrooms are without full-time, certified teachers according to data released by the Arizona School Personnel Administrators Association and ASU’s Morrison Institute.

Teacher pay was cited as the primary reason teachers leave the profession. Arizona’s teachers are some of the lowest paid in the nation, and, when adjusted for inflation, their wages have actually declined between 10% and 11%. The one-percent teacher pay bonus implemented for fiscal year 2018 does not change Arizona’s teacher pay rankings or cover inflationary costs.
Rural schools and those with a majority of students in lower socioeconomic levels are losing more teachers of all types, especially those with exceptional credentials as schools in more affluent areas can afford higher pay and better student to teacher ratios.

At the same time Arizona is facing a teacher shortage and billion-dollar school funding deficit, lawmakers have continued the trend of cutting taxes and/or increasing tax credits every year but one since 1990. This has cost the general fund more than $2.2 billion in revenues and more than double that amount when adjusted for inflation.

Our students receive 31% less in per-pupil funding than the national average, even though we have some of the highest rates of childhood poverty in the nation. 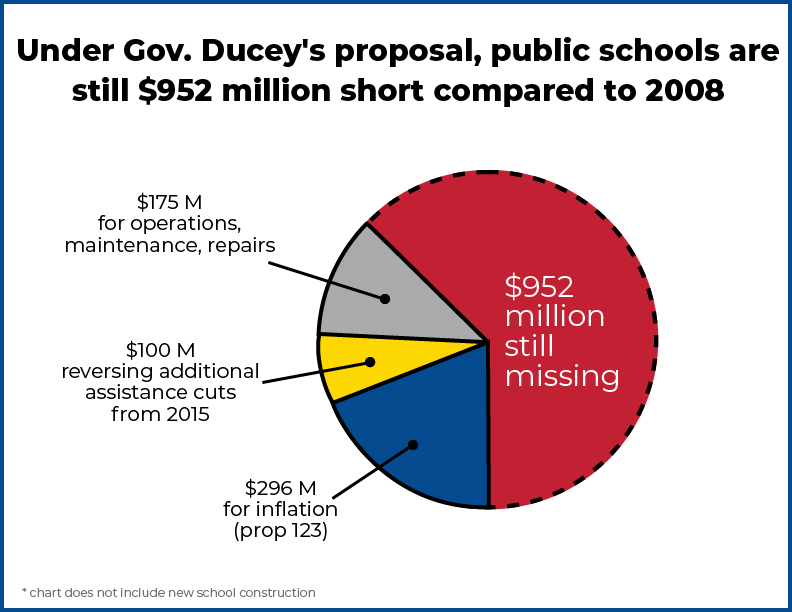