Thousands of people lined the streets on Saturday morning near the state Capitol, calling for greater public-education funding and blasting the expansion of a school-voucher program that allows families to use public money for private-school tuition.

The rally and march were organized by the Arizona Parent Teacher Association and AZ Schools Now, a coalition of teachers, parents and faith leaders advocating for increasing investments in school funding.

Attendees carried signs supporting the Save Our Schools Arizona group, which was largely responsible for gathering enough signatures to let voters decide whether Arizona moves forward with or rejects a massive expansion of the state’s school-voucher program.

The ballot measure, should it clear a pending legal challenge, could undo a law signed by Gov. Doug Ducey last year to expand the voucher program to more Arizona students.

The political event included bounce houses, music and food trucks for families. People made signs for the march and listened to speakers discuss the state of Arizona’s public-education system. 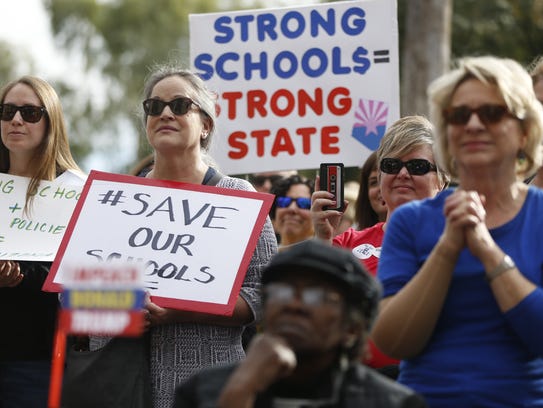 People listen to speaker Jevin Hodge during Save Our Schools rally and march outside the State Capitol on Jan. 6, 2018 in Phoenix. (Photo: Patrick Breen/The Republic)

Dawn Penich-Thacker, SOS Arizona spokeswoman, said the march was created for two reasons. The first, she said, was to celebrate public schools for doing what they can with the limited funding that state leaders have invested in education.

The second, she said, is to hold Ducey and lawmakers accountable, making them aware that their talking points on education funding fall short of resolving what has become a crisis in public education.

“I hope this is a very physical and visual piece of evidence that Arizona really loves its public-education system and relies on it,” Penich-Thacker said. “Those of us with children rely on it to educate them, but as a state we rely on it for quality of life.”

Students who are accepted into the school-voucher program can use taxpayer dollars to pay private-school tuition or other educational expenses.

Daniel Scarpinato, spokesman for Ducey, has said that improving schools’ funding and boosting teachers’ pay remains one of the governor’s top priorities.

Ducey will outline his priorities for this legislative session on Monday.

Beth Lewis, chairwoman of Save Our Schools Arizona, said the group started as a grass-roots organization of Arizona families.

“We were just concerned moms and teachers who decided that voting every couple years, yelling at the TV and posting rants on Facebook just wasn’t getting us anywhere,” Lewis said. “So we starting coming here to the state Capitol.”

Lewis said they waited for hours on end to speak about bills they believed would hurt the state’s public schools, specifically referring to the voucher-expansion legislation, Senate Bill 1431.

When it passed, the six women were devastated and funneled their frustration into creating SOS Arizona. The group collected enough signatures to put the expansion legislation on hold and refer the issue to the November 2018 ballot.

The Empowerment Scholarship Accounts program is currently limited to specific student groups, including students who come from poor-performing schools, military families or have special needs.

Lewis said as a fifth-grade teacher, the 1 percent raise Ducey has touted gives her about $6 a week to spend.

Education advocates also called on Ducey and the state Legislature this session to extend Proposition 301. The 0.6 cent sales tax pumps about $600 million into schools each year and is set to expire in 2021.

“Today, we call on the Arizona Legislature to act now, within the first 30 days, to prevent the loss of $600 million in education funding when Prop. 301 expires,” Lewis said.

The SOS Arizona group gathered sufficient signatures to allow voters to decide whether Ducey and Republican state lawmakers may move forward with a school-voucher program they narrowly expanded last year.

But they immediately faced legal challenges from supporters of the expansion.

The referendum would be known on the November ballot as Proposition 305.

A “yes” vote on Prop. 305 would support upholding the contested legislation, which would allow more public-school students to become eligible to apply for the voucher program.

A “no” vote would undo the expansion of the state’s school-voucher program.

Initially, it was offered to families with students who have special needs, granting them funds to pay for private-school tuition, tutoring and other services.

Lawmakers expanded it to include, among others, students in poor-performing schools and those from military families.

Lawyers representing education advocates who want voters to repeal Arizona’s school-voucher program argued in December for a dismissal of a legal challenge to their ballot referendum.

School-voucher supporters have said the ballot measure to repeal the expansion should face a legal challenge over what they called the possibly fraudulent manner in which signatures were gathered to put the issue before voters.

Maricopa County Superior Court Judge Margaret Mahoney listened to arguments from both sides for about an hour and a half and is expected to decide within 60 days whether the case proceeds or is dismissed.

Arizona ranks near bottom in funding

Stanton is running to represent Congressional District 9, which includes most of Tempe and parts of Chandler, Scottsdale, Mesa, Ahwatukee Foothills and north Phoenix.

He said public education is important because the state can’t be successful in fighting for economic development if Arizona is ranked “dead last in education finance for our teachers and students.”

“We’re 49th in the country in per-pupil spending,” she said. “Our Legislature refuses time and time again to fund our schools. I, as a teacher, refuse to allow one more cent to be taken from my classroom.”

“It’s significant to me because my son Andy has now gone his entire school career in underfunded and overcrowded classrooms,” Simek said. “That’s not good enough for me.”

Teaching ‘to make a difference’

Josh Meibos, a physical-education teacher at Crockett Elementary School in east Phoenix, stood before the crowd as 2018’s Arizona teacher of the year.

“In Arizona, we aren’t dealing with teachers who seek to enter the profession for the easy hours and the long vacations,” Meibos said. “We are teachers that want to enter this profession to make a difference.”

He commended teachers committed to staying in the education field and caring for their students.

“Think of all the good stuff you’re doing in your classrooms,” Meibos said. “Think of what your colleagues are doing in their classrooms. These are the stories that need to be told.”